At the Irlen Clinic we test each child for reading accuracy, reading comprehension, and spelling at the initial diagnostic session, and then later at their retest after wearing Irlen Filters for at least 6 months.

The results of these tests are graphed as part of the Retest report, to show if and by how much they have improved in these three test areas. However the total mass of these results for all students also forms a bank of data that can be analysed.

This analysis gives a very simple and obvious way to answer the question that everyone wants to know: "Do Irlen Filters work?"

This diagram above shows how we interpret and graph the changes for each student, and the data that formed this analysis.

The red line is hypothetical "average" progress ... one year of improvement in one year. Although we are well aware that improvement with real people doesn't follow such a nice neat steady growth, this still forms a simple but reasonable "base level" to compare and calculate changes.

The yellow line could be described as the "straight line" progress for a sample student .... where they were before intervention and where they might keep heading without intervention. They almost always come to the Irlen Clinic because they are having a problem, so they will almost always be lower or behind in one or more of the tested areas. The first test forms the defining 'marker' for the yellow line. ... in this sample case, at age 8 the sample student tested at being around age 5-6 in that area ... eg reading accuracy. That yellow line is then continued as a straight line from there to estimate where they might be some time later ... eg a bit over age 8 for accuracy when they are at chronological age 12.

(For anyone that has worked with real students having reading difficulties, they will recognise that this is actually very generous. In actual fact students having difficulties often do not keep improving but most often begin to "flat line" ... they get so far and then get stuck at that level. However, for the purpose of this analysis we have taken the simplified "straight line" assumption, which is obviously much easier to analyse.)

The green line is the "actual" progress for a sample student. Notice that the green line matches the yellow line up to the point of their first (diagnostic) test with the Irlen Clinic. The point after that is where they tested when they came back for their Retest ... and this is the one point that really counts on this. At that point the "proof is in the pudding"! Have they improved or not?

To show you what we mean, here is one sample student result: 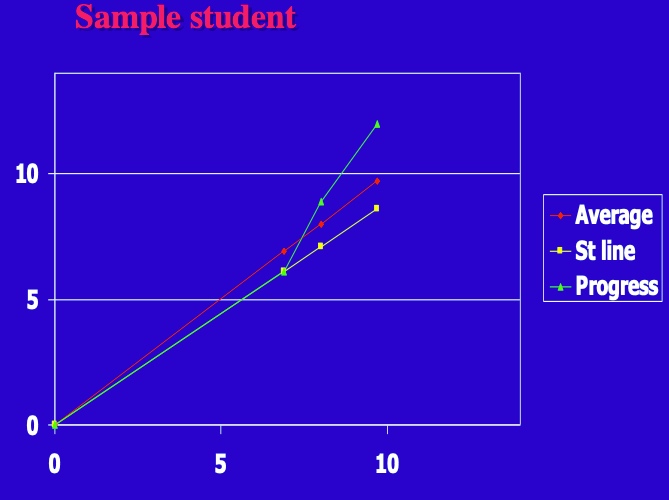 So that is a wonderful "super" sample, you might say. If only that was real and not just a 'sample' to show the system! Well ... read on to the actual results we got when we analysed all the student results over a period of time ...

The sample size for this analysis was 323. This was the number of clients that had valid results for the analysis:

Apart from that, there were no other criteria ... ie we did not just pick the "good" results - they are all there ... the good, the bad and the ugly!! It did, however, leave out those who didn't have valid data for various reasons ... adults, those that didn't get Irlen Filters after the initial diagnosis, and those that didn't come back for a Retest.

Although each student would have received a Retest report with graphing of their individual results, only the "raw" data result numbers were used for analysis.

There are four sets of analysis results shown here:

The following points can be seen clearly from these results:

We will finish this analysis report with the results of one more actual client (name removed). This client had the testing, wore Irlen Filters for a while and had a Retest ... with very good improvement ... then continued for a while longer and came back for a second Retest ... with even better results. Then they decided not to continue with using Irlen Filters. They did come back for a later Retest, though, and the results were "interesting". You can form your own conclusion from this example. 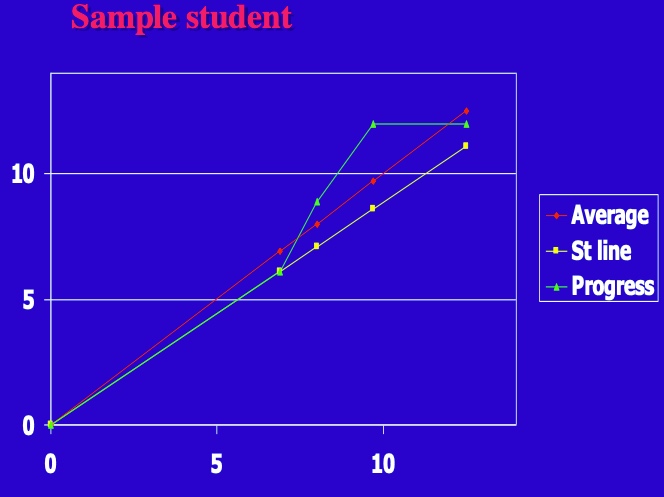